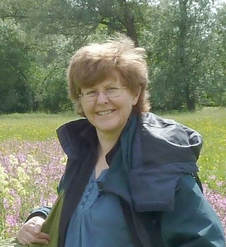 When Oxford changed from a '3-tier' education system to one divided into primary and secondary levels only, 10 of its schools were closed, one of them be﻿ing  Milham Ford Girls' School.  The announcement of these changes some years earlier had led Judy (pictured left), at that time the schoo﻿l's Biology teacher, to consider how the flora and fauna of the playing field and meadow areas in front of the school, notably the rare fungi and the orchids, could be protected in the future.  Her short presentation to a meeting of the full City Council in November 1999 on the wildlife importance of the site was very well received and created considerable interest.

Working with Dr Curt Lamberth, an environmental consultant, Judy went on to plan the formation of a local wildlife group.  In December 2000 a meeting was held in the school dining room (48 attended), during which local people were asked to help with surveying the wildlife of the Milham Ford site and with other management activities, including distributing newsletters to residents. 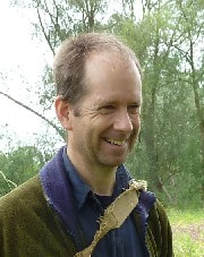 Dr Curt Lamberth is one of the contributors to scientific research conducted in Marley Fen Wytham Woods by the University of Oxford.  He appears in 'The Fen', the 5th video in a series entitled The Laboratory with Leaves produced by the University. The  Wytham Room Exhibition, in the University of Oxford's Museum of Natural History, includes exhibits featuring work Curt has undertaken in Wytham Woods.  He has also been involved in the River of Life Project, whose aim is to restore wildlife habitats and wetland features, including creating new ponds, along 2 km of riverbank along the Thames.  The project will ultimately extend to about 50 hectares of Earth Trust land.

The ponds and stream in Milham Ford Nature Park were designed by Curt, as was the Bee Wall built at the John Radcliffe Hospital site in 2006 as mitigation for the addition of a new car park to the hospital.  The south-facing wall is well occupied by insect life.  In April 2015 Curt supervised the building of a bee wall in Milham Ford Nature Park to provide homes for mining bees (solitary bees that do not swarm).  The work was carried out by FoMFNP with the enthusiastic help of Oxfordshire Conservation Volunteers - photos and a video can be found under 24 April 2015 on the April 2015 onwards volunteering events page.
On 19 March 2001, the NMWG held its inaugural meeting in the school hall to elect officers and clarify its aims.  The Constitution subsequently drawn up stated that the aims of the group were to: The NMWG influenced the Oxford Local Plan and played a major role in the design of Milham Ford Nature Park. The group held its inaugural meeting on 19 March 2001 following an initial meeting of local people in December 2000 arranged at the instigation of Dr Judy Webb.  The stimulus for this was the threat to the important local wildlife area in Milham Ford School grounds occasioned by the closure of the school and sale of the site.

In 1987 the Park had no meadow flower areas. Thanks to the enthusiasm of Judy Webb and the help of volunteers, a large proportion is now covered in plants that provide food for pollinators.  Bees need nectar to give them energy. Buttercups offer little nectar but lime tree flowers provide a lot.  Pollen is a good source of protein, needed to feed young bees.  Bees that pack pollen into pollen sacs on their hind legs are not as good at pollinating as those that carry pollen in hairs on their body, from which the pollen is easily rubbed off onto flowers.

At the AGM on Monday, 30 March 2015, both the Chairman and the Treasurer stepped down from their posts. Although someone offered to take on the role of Treasurer, nobody could be found to take over as Chairman, therefore it was not possible for the group to continue, as a Chairman is needed for legal reasons.  Judy Webb is continuing to organise volunteering work in Milham Ford Nature Park.  Members of the former NMWG were designated the official Friends of Milham Ford Nature Park by Oxford City Council and subsequently the group continued its activities (volunteering) under that new name.  Payment of a subscription for membership is no longer required.  The main cost incurred by the NMWG was the annual premium for insurance to cover volunteers working on the site; insurance cover is now provided by Oxford City Council.